This page outlines my observations on the Microdrive cartridge versions of the Psion software. It may not be conclusive, as I suspect there are unknown versions yet to be discovered.

After the demise of the QL, the software was developed further and all four packages were combined and improved upon to become Psion Xchange. There was also a version made for IBM compatible PC's called the PC Four.

It was an innovative idea at the time to bundle software from an established company like Psion with each new QL. It added value and was a great purchase incentive. Software was obviously viewed by the public as essential and was normally quite expensive to buy on its own. Psion produced four pieces of software - a spreadsheet (Abacus), database (Archive), business graphics program - i.e. for generating visual charts (Easel) and word processor (Quill). Early QLs came with what was collectively known as v1 of the software, which had a number of bugs and wasn't very useable. Almost a year later this was replaced with v2.00 which ironed out a lot of the issues. Note that there were no versions publically released between v1 and v2.00 (AFAIK) and that v1 and v2.00 were both English language, UK market versions - foreign versions came a little later.

The foreign versions (including the English language USA version which is unique in that all of the software had different names) were given their own version numbers and confusingly, there is some crossover and inconsistency. Here is a summary of the different versions:

At this stage it seems that individual packages were sometimes updated on their own and that may explain why Easel 2.3 exists in French.

At this stage, probably right at the end of QL production, there were some 2.4x versions made. It's possible some of these were improvements to single packages, e.g. the 2.45 German version of Abacus has been fixed to correctly link to the help text file (this didn't work in v2.25) and to also to work with greater than 128k RAM:

Note also that most of the foreign versions were definitely tied to their 'home' QL ROM and could not be run on other QLs, e.g the German version will only run on a QL with MGG ROM, the French version only works on an MGF QL etc. If the 2.2x foreign versions are used on a UK QL with e.g. JS ROM, they will load and start, but as soon as you try to do anything useful (like load or save something) a warning message will appear in the foreign language telling you that the software will only work with a specific ROM - and then it stops responding and you have to reset.

Estimated Rarity (1 - 10): 1 for all UK versions, 6 for the German version, 7 or 8 for most of the others and probably higher than that for the Greek version. 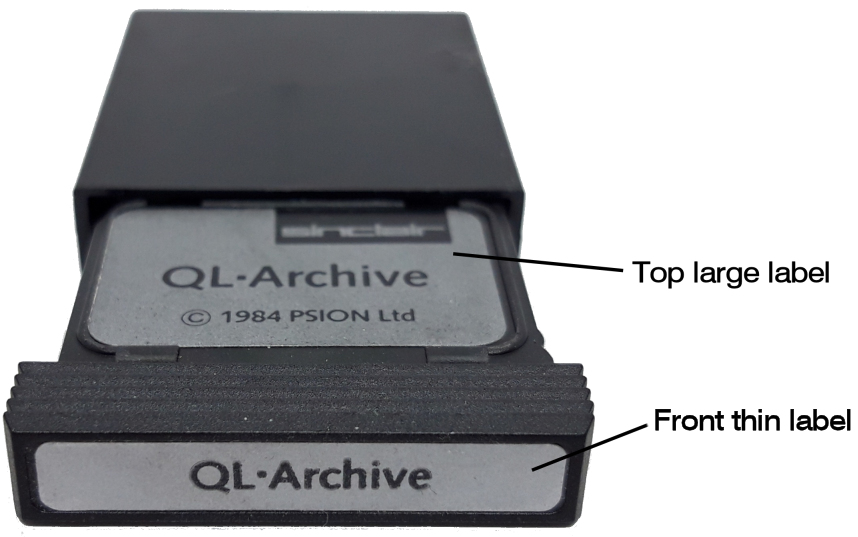 The labels changed over time, too, and there were different combinations of top large label and front thin label. Again, it doesn't seem to be entirely consistent, in fact it's very likely that Psion may have used whatever labels they had available, especially towards the end. These are my observations and guess-at order in which the label combinations were used.

The earliest labels, used on all v1 software were made of plastic, are mainly black and had the software titles on the front thin label entirely in uppercase. The top large label is a little too small for the space provided (or they've all shrunk over the years?). This cartridge contains Quill v1.03. 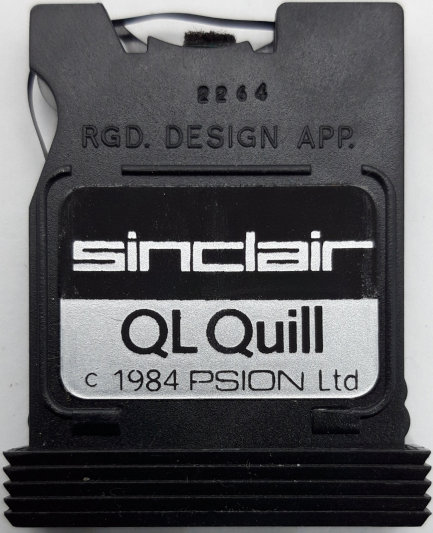 Plastic thin front label and a black/silver paper top large label (also used on version 3a). This cartridge contains v1.0 of Easel. This type of label has also been seen with versions 2.30, but I cannot be sure if the content was original - perhaps some were re-used later on. 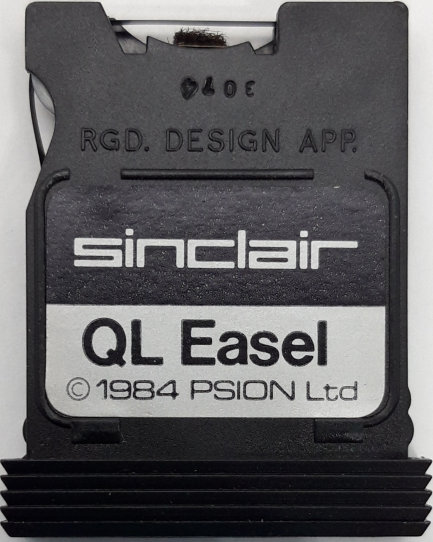 All labels from her on are made of paper, unless otherwise stated.

The all-silver Version 2 labels are by far the most common type and are what was used on most v2 to v2.2x software. They are made of paper, the front thin labels are not uppercase and they include a 'QL-' prefix. 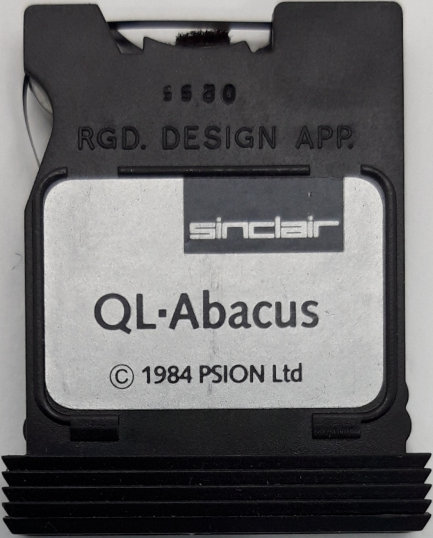 Version 2b have the same type of top large label as 2a but the front thin label is now black with silver text. This type has been seen on a v2.00 cartridge. 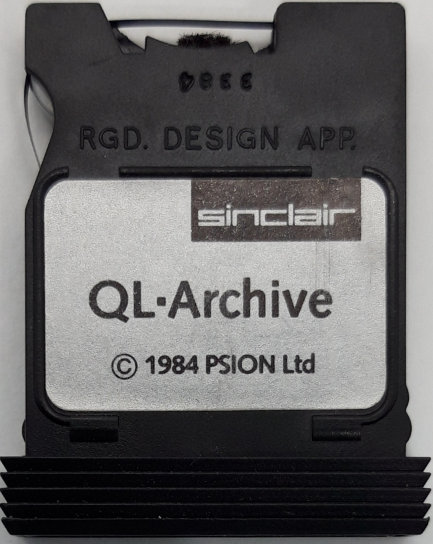 As 2a but with silver and black top large label - top part silver, bottom part black. This cartridge is a v2.25 German version. 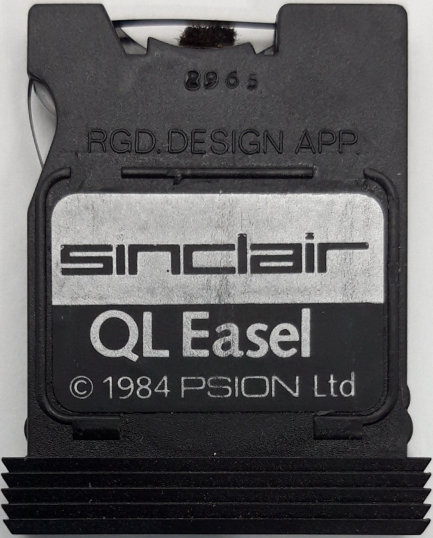 Version 3 labels now omit the prefix 'QL-' on the front thin label. The large top label has a black top half and silver bottom half. Observed on a v2.00 cartridge and also on a v2.3. 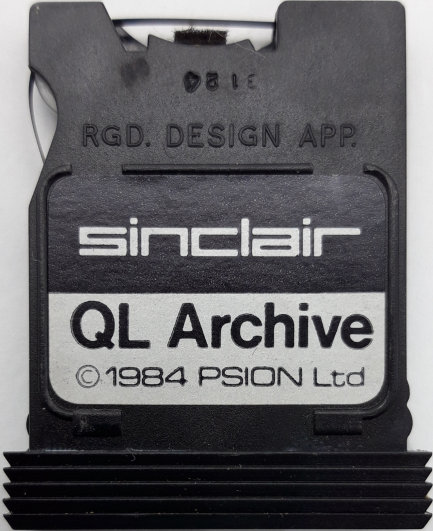 As 3a but with back thin front labels. This cartridge contains v2.3 of Easel. 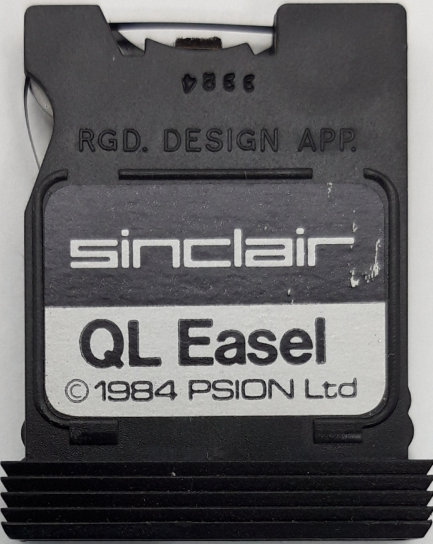 It's also possible that some very late versions, sent out to people that had a particular issue with something, were supplied without any labels. Sometimes the front thin labels can detach on their own, but generally the top large labels stay put and any attempt to remove them usually damages them or at the very least will leave marks.

For completeness, the unique US labels looked like this: 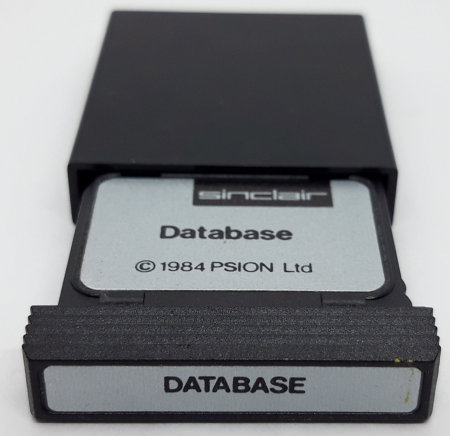 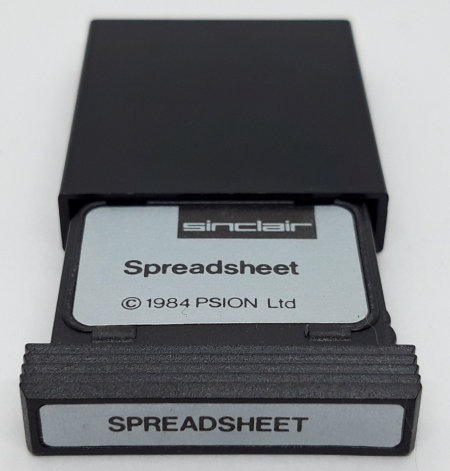 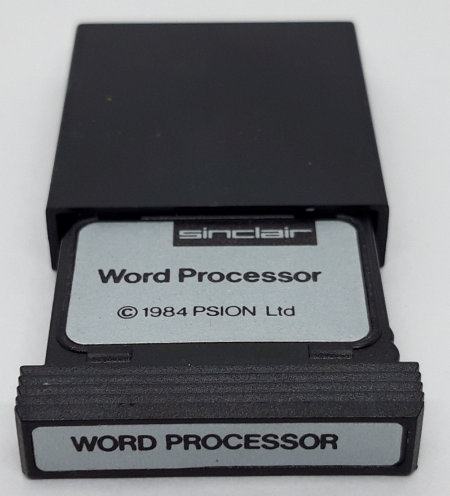 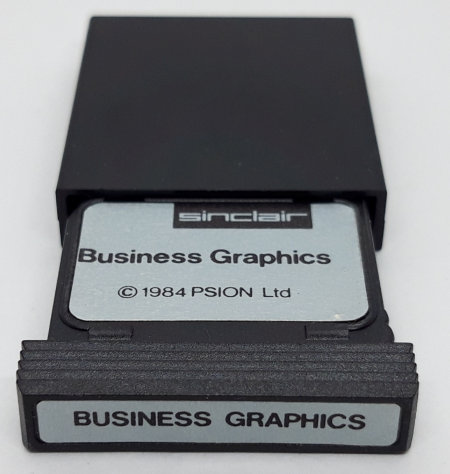 All four cartridges were housed in a Sinclair branded wallet, annoyingly with nothing on the spine, so from the side they look like all the other plain Sinclair cartridge wallets! It's possible (actually very likely) that some 'upgrades' may have been supplied without wallets.

Due to the different software titles, the US versions were also housed in a completely different wallet: 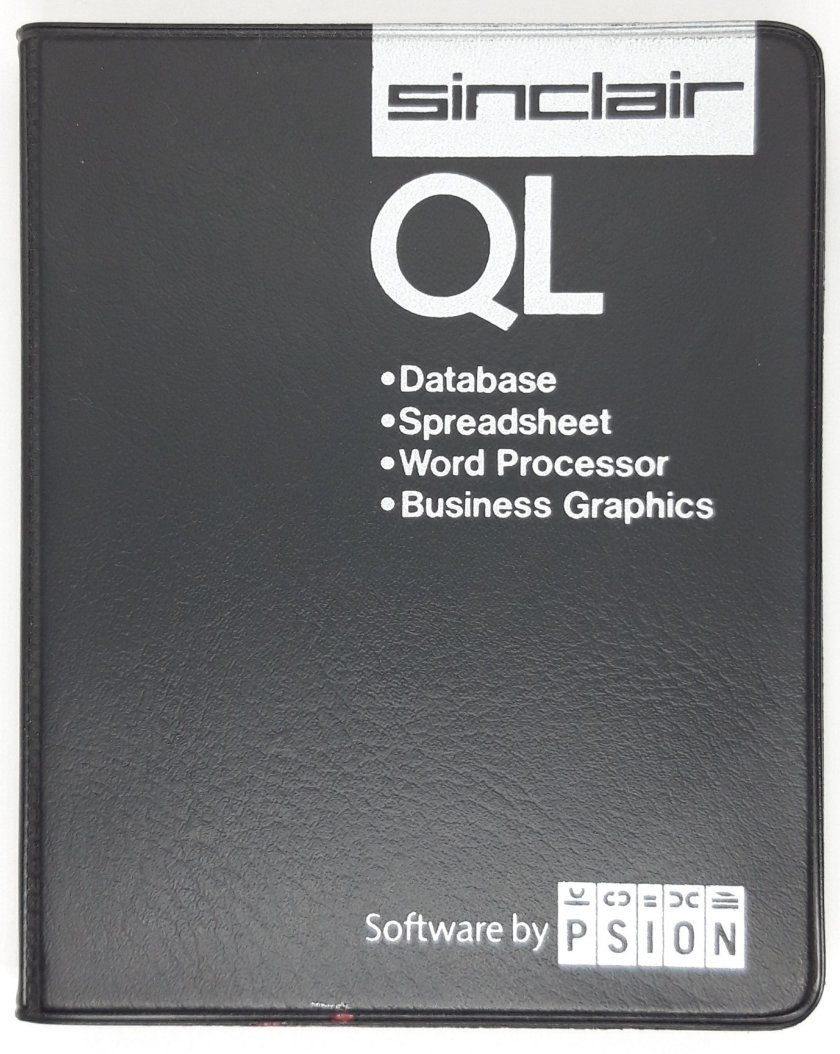 For all other versions there were 2 wallet types that have different Psion logos at the bottom. I think the version with the text based logo came first, but there is crossover and it's likely that both types were used interchangeably for the majority of the time that the QL was in production. 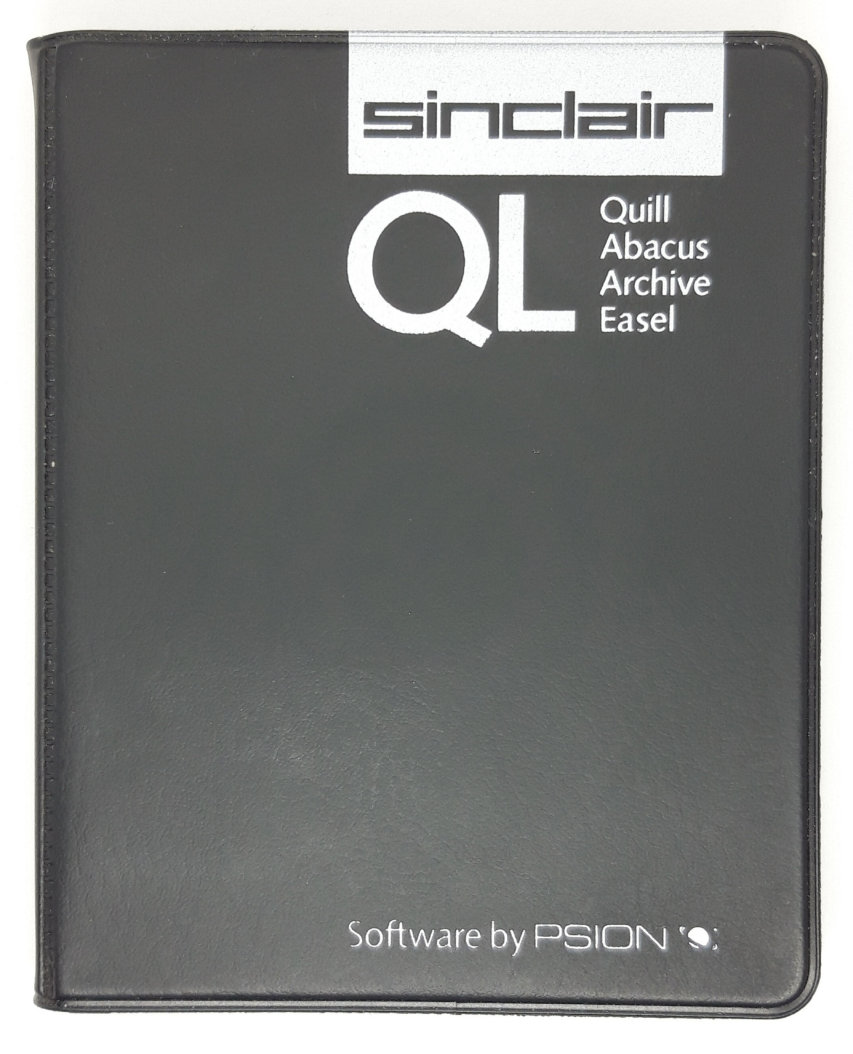 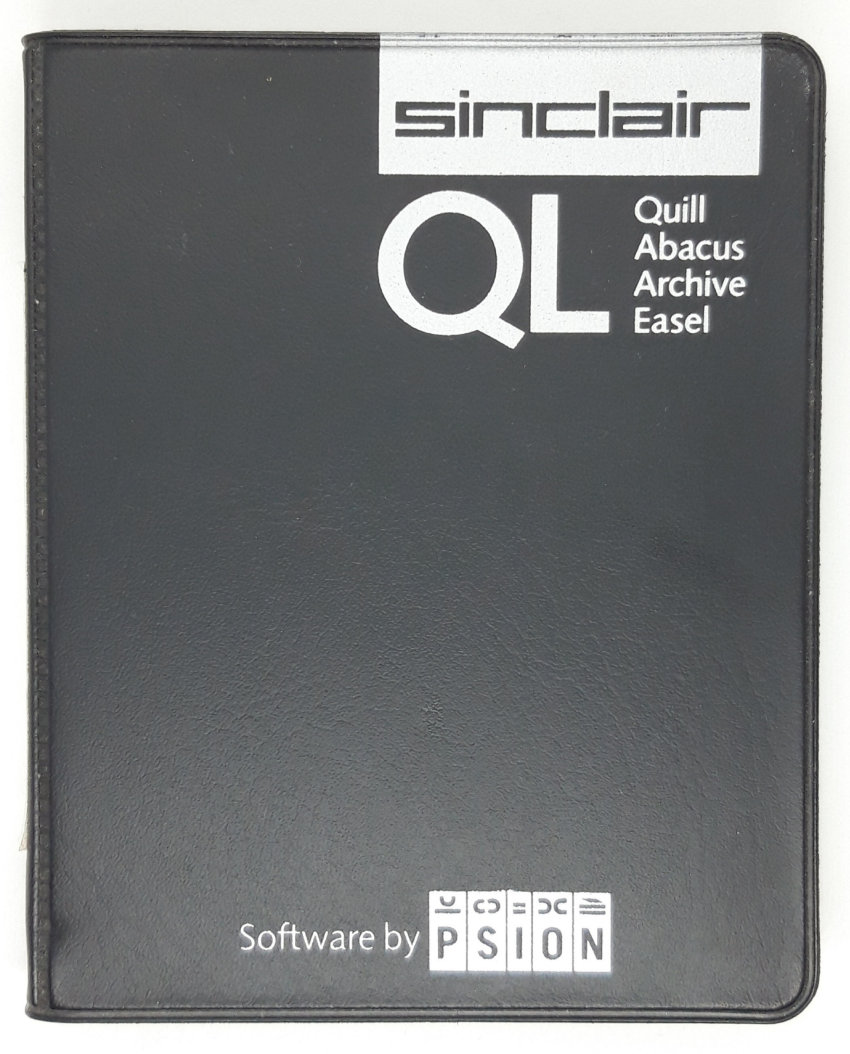